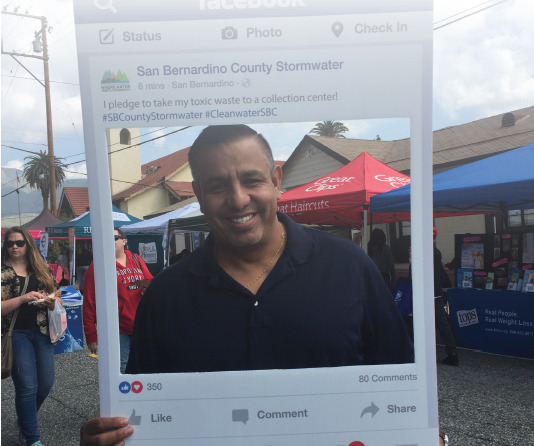 SGA is immensely proud to have worked on the re-branding components for the San Bernadino County, “Where Water Meets Community” outreach campaign. Identified by the California Stormwater Quality Association (CASQA) as an outstanding stormwater program, the campaign consisted of a complete brand overhaul to help engage and educate the community in stormwater pollution prevention.

SGA was brought in by San Bernadino County (SBC) to help rebrand their long-running stormwater program because it had reached a “plateau of involvement.” The existing programs were very good, but they lacked a unifying message and strong motivators for citizens to get involved. After all, communities change, and so does the messaging that will successfully work to mobilize them. SGA partnered with SBC to find messaging that would resonate with their communities—without having to reinvent the wheel. Giving credit where credit is due, the public education materials SGA came across were stellar. What changed was the way this information was communicated to the public. The new branding was community-centered and fun—developed to tap into the pride that residents’ already had for their communities. After much deliberation, the rebrand was launched under the unifying brand: “Where Water Meets Community.”

HOW WAS SUCCESS MEASURED?
With data, of course! The new campaign increased stormwater pollution prevention awareness which saw significant increases in public engagement. From pre-to-post rebranding, Facebook followers increased by 143%!

Average website visitors increased by 49%, the average page views went up by 41%, and the e-newsletter subscribers saw a total gain of 46%.

The rebranding efforts for the program showed a rise throughout the household hazardous waste and pet waste outreach programs. Fecal contamination in local streams from improper disposal of dog waste is one of the most widely spread sources of bacteria pollution in the County. After the rebranding and reformulating the messaging to revolve around protecting the community and keeping the County clean and beautiful, the distribution of dog canisters increased 373%.
The biggest measurement of successful for SGA—our client’s happiness!
[testimonial_view id=”2″]

WHAT DID THE REBRAND LOOK LIKE?
Upon finalizing the details of the new brand with the client, SGA went to work developing a massive multi-media campaign guided by this new unifying messaging and modern design. This campaign included an overhaul of County’s website, a pointed social media campaign, and brand new HHW and pet waste outreach campaign materials. See a few before and after examples here.

WHAT CAN WE LEARN FROM THIS WIN?
While rebranding is not a new concept for commercial entities, it is something that can prove challenging for public agencies. Branding, in the first place, is hard enough. It takes a lot of time, energy, and resources. So—why lay it all by the wayside and start anew? Simply put—because rebranding enables an organization to make itself relevant and get noticed. While rebranding isn’t easy, if its done thoughtfully and correctly, the benefits will certainly outweigh the cost.